3-Pointers
1) Bottom line is that Greece dominated Israel in every facet of their FIBA World Cup Qualifier in Tel Aviv. If anyone thought that the Greece C team would be easy fodder for Israel they were sadly mistaken. The Greeks moved the ball at ease, broke down the Blue & White defense and looked even stronger than in the game they played in Crete. Israel hung around for the first half when they went into the break down 49-42 but then the visitor’s laid the smack down on in the third quarter outscoring the host’s 24-10 in the frame. In fact, Israel didn’t score a point for 5:53 as Greece went on a 16-0 run taking their lead from 54-48 to 70-48 and that was all she wrote. 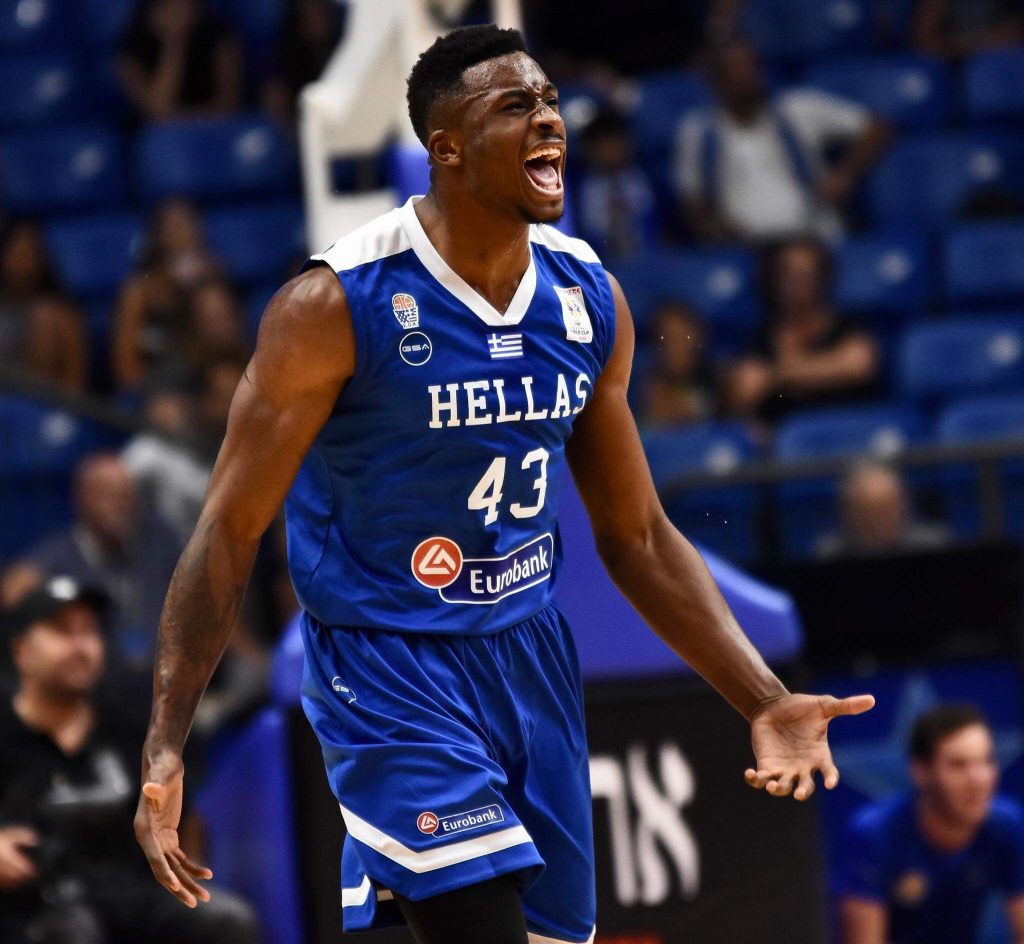 I spoke to Thanasis Antetokounmpo and asked him if he was surprised that the game ended up being a lot easier than he originally thought it would be, “For sure it was easier than we thought. There was a good crowd and they played hard and knew how we would play. They tried to counterattack and read our defense and they did most of the time. But we had a good day.” The forward who scored 8 points and added 2 blocks continued and looked ahead to his side’s next game, “I was just doing my job and helped the team. We still have another game against Estonia and we need that win. It’s really important to us.”

2) Rich Howell didn’t get off to a good start for Israel and was sent to the bench early on in the matchup. Without a productive Howell, Israel was going to be in for a tough game. The naturalized big man went 3/10 and picked up 4 fouls in 17 minutes of play for a rough night at the office, but he agreed to speak to The Sports Rabbi following the game and didn’t shy away from his responsibility, “It was a tough game all around. I played terrible. I tried to open it up on other ends but my baskets weren’t falling. We have a quick turnaround on Monday so hopefully we can get to Great Britain.”

More about the tough defeat:
“It was tough and they knocked down their open shots. We didn’t catch a break. We had the scrimmage game against Ukraine and we had a couple of breaks to get back into that game. Against Greece nothing went my way or my teammates way, everything went their way. I’ve got to tip my hat off to them as they have a great team and a great coach. We have a chance to bounce back on Monday.”

Keys against Great Britain on Monday night in Glasgow:
“The keys versus Great Britain will be confidence and focus. After losing by almost 30 at home means you have to come back into the next game with a chip on your shoulder and I think that’s one of the biggest things. It’s not going to be about basketball and it’s not about X’s & O’s, it’s about do we want to win the basketball game and go to the next round and I think that we got the guys to do it.”

3) One of the highlights for Greece was the play of budding star Konstantinos Mitoglou who led the team in scoring with 21 points going 9/11 from the field while adding 4 rebounds, 3 rebounds and 3 assists. Mitoglou was with Panathinaikos this past season featuring primarily in the domestic league scoring 5.6ppg while hitting 13/28 3-pointers throughout the campaign. The 22-year old has represented his country at all of the various youth levels and played college ball at Wake Forest for three years as well. The Sports Rabbi spoke exclusively to the promising talent after his performance about the game that was, “We had the mentality to go and play hard, focus on the energy level and we won the game.”

His past season campaign and looking ahead:
“It was great as we won the championship and that was one of our goals. It was a great experience and my rookie season was really good. I learnt a lot of things and I look forward to a great season next year.”

Overtime
Israel was off, way off all night long. Jake Cohen (21p) was one of the few bright spots for the Blue & White in a game that everything that could go wrong did go wrong. Gal Mekel scored only 4 points on 2/7 with 3 turnovers, Raviv Limonad also scored only 4 points on 1/5 with 3 turnovers in 12 minutes and Rafi Menco also dropped 4 points in 18 minutes for Israel. Tamir Blatt has a good first half but the disappeared for the final 2 quarters as he played a team high 29:03. Not good, not good at all. But I have to take coach Oded Katash to task for not playing Bar Timor more than 2:19. On the defensive end, Timor is arguably one of the better defenders Israel has to offer and is also one of the better 3-point shooters going 34/86 for close to 40% on the season. For a National team that consistently struggles from beyond the arc, it’s incomprehensible to me that Timor is not getting serious playing time to help out a poor shooting Israel that went a pitiful 5/19 from 3 against Greece which hit 50% of their long rangers 13/26. Katash knew that this is one of Israel’s weak links especially after last week’s exhibition game against Ukraine where they went 4/23. When asked at the post game press conference Katash said that he makes decisions as the game plays out and it’s nothing against one player or another. That may be the case, but knowing what Timor’s ability from deep should have made him a prime candidate to play more minutes than he did.