3-Pointers
1) Scottie Wilbekin was masterful against CSKA scoring 22 points, dishing out 9 assists, grabbing 5 rebounds, drawing 8 fouls and ending the game with 33 efficiency rating to lead Maccabi Tel Aviv to their first home win over the Russians in ten years when they win back in November 2009. His game should be good enough to take home the Euroleague Player of the Round honors but he also made a huge statement as to who perhaps is the best guard in the Euroleague. “Scottie was amazing,” said Angelo Caloiaro. Yes, he certainly was amazing and he ended up winning the matchup against the self proclaimed “Best guard in the Euroleague” Mike James. Sure James is good, actually he’s great, but he didn’t have one of his usual great games as Maccabi was able to hold him to “only” 22 points but his percentages were horrible going 5/17 on the night. The Yellow & Blue double teams and switching defense was able to mess up both James and the rest of his CSKA team as Coach Ioannis Sfairopoulos was able to school Dimitrios Itoudis and find a way to win with his star guard playing not only scorer but facilitator as well. ”He’s a big part of our team and he’s the leader of this team,” said Sfairopoulos.

But one can say this, Wilbekin is a modest and humble leader as he didn’t really want to talk about himself after the game and he also had his opinion as to who the best guard is in the league after James had declared that he himself was the best guard in an interview ahead of the game in the Israel HaYom newspaper, “He’s pretty good James. I would never say it (that I’m the best guard). I think Shane Larkin is. He’s killing this league. But I mean Mike has a lot of confidence and if it works for him, good for him.”

2) Everyone had to step up due to the absences of Omri Casspi, Nate Wolters, John DiBartolomeo and Tarik Black who joined the auspices list just two hours before tip off. Not only did each an every player on the team step up, they found a way to pull off an incredible upset. Very few people thought that Maccabi were going to be able to win even before Black was ruled out and once h was that number nosedived even further. “It was a good win as we had a lot of teammates missing. It was a win of the heart,” explained Quincy Acy. Elijah Bryant agreed as to how Maccabi compensated for the loss of players due to injury, “We tried to lock in on defense and we trusted each other and we came out with the win.” Yovel Zoosman has really pushed his game up a few levels over the last few contests and he also chimed in about stepping up, “I wanted to be as aggressive as possible as we had injured players and I needed to step up. We had to make it hard for them every possession and we had to want it more.” Scottie Wilbekin gave his thanks to the whole squad, “I’m proud of the team for pushing through.” Lastly, Coach Sfairopoulos “spoke about the team’s desire and drive to win under any circumstance, “They gave their heart and soul especially in the second half and that decided the game with our determination and effort from our players. Sometimes one game shows what we can do and we showed quality. If we can continue to work hard and the injured players come back we will do even better.”

3) Othello Hunter came back to haunt his old team. Usually when Maccabi’s former players come to town they somehow always play their best game. This time the tables were turned as Maccabi’s big man just buckled down as he scored 14 second half points against his ex-club. “He’s a guy we can count on,” said Sfairopoulos. “He covered for the absence of Tarik Black and he had a big second half.” Zoosman who had a superb game once again against CSKA also had a good word about Hunter, “Othello is amazing and he does his job with 150% effort. I think deep down he is very happy.” Without 35 minutes from the Ohio State product, I’m not quite sure Maccabi comes away with the victory. Hunter himself also had a word about his performance, “I just wanted to win by any means. We got a lot of guys out, so I had to step up and try to play as hard as I could for the team.” 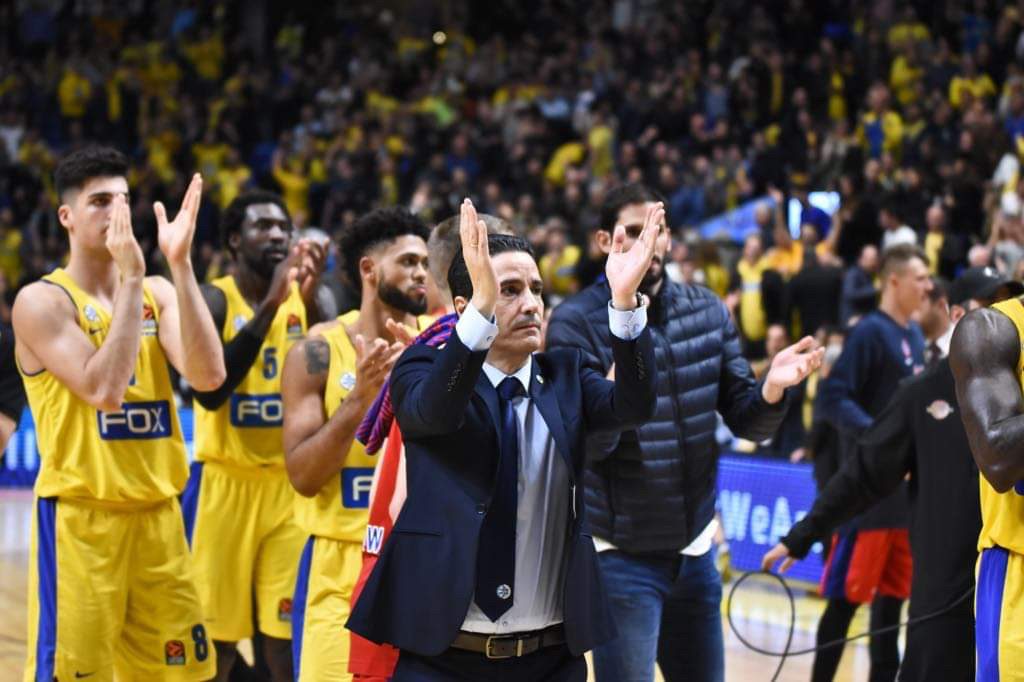 Overtime
This was a statement win any way you slice it for Maccabi Tel Aviv. Coach Sfairopoulos may not have wanted to admit it before the game as to how important this game was for the team, but it was. “Yes it’s a statement that the team can do great things. We have to stay humble and we saw that we can do great things. This is a marathon and we have to be mentally strong to survive to the end.” How was the win accomplished? A number of ways explained Sfairopoulos, “The fans we’re the most powerful audience that we have had and they forced and pushed the players to give them the most. We need them in both the good and bad moments which I’m sure we will have.” What else helped Maccabi out? “I think the mentality of the players is the most important thing and that they have a winning mentality. We have been working on this and they want to win the correct way. We don’t have selfish players and we saw that in the second half.”

And-1
The second half saw Maccabi hold CSKA to just 28 points after giving up 52 points over the first twenty minutes. What was the key to stopping CSKA in the final two frames? “At halftime I told them that we can win the game and that we can fight and do it. With our amazing defense and effort and fight we did,” said Sfairopoulos. “ Acy also spoke about buckling down, “They scored a lot in the first half but we buckled down in the second and we showed a lot of heart to compete.” Bryant as well knew what had to happen, “That was too many points they scored in the first but we trusted each other the whole way through.” Caloiaro who has become one of the great fan favorites gave them the credit for the club winning the game, “The crowd was amazing and we were down early but we pushed and got the win. It was great to get a win like this even though we had all of those injuries. We believed we could win. We never doubted it for sure. I’m starting to get my rhythm back.

Tip-Ins
Deni Avdija was very upbeat following the game and although it looks like from the stat sheet he didn’t do much in about 9 minutes, that can’t be further from the truth. The potential 2020 NBA Draft lottery pick was very excited that the team had beaten CSKA in a tight match. Think about this, Avdija was all of 8 years old the last time Maccabi beat CSKA p at home, “I’m very happy with the win. I’m also very happy for us that we fought today and I am proud of everyone with the spirit we came in today. The game is dynamic and there will be ups and downs and we have a good team, good tactics and a good coach. We keep fighting.” Avdija also put some time in as the point guards which was a bit new for him, “It’s a position I’m not used to playing and it’s a great responsibility. I hope I did a good job.”

Quincy Acy – “Our goal was to set the tone. I came to play aggressive and we all came that way.”