Well it’s off to the Europa League playoffs for Maccabi Tel Aviv after drawing at home with Basel 3-3 in the second leg of their UEFA Champions League third round match up. Definitely some lessons should be learned by these two games and appropriate changes should be made in order to have a successful domestic season that begins in two weeks time.

The fact that Maccabi was down 3-0 by the 34th minute and were able to come all the way back to draw with Basel is a minor victory in itself. After Sheran Yeini gave up a penalty in the 5th minute one can only feel the sails come out of the Maccabi Tel Aviv players and fans. Going down 2-0 especially when embattled Egyptian Mohamed Salah slams home the goal could only make things worse for the club and of course a third nail in the coffin should have buried Maccabi and could have turned Bloomfield into a makeshift cemetery for the last 60 minutes of the match. But the fact that they were able to raise their game and not submit to the Swiss side is a moral victory that may be very helpful as the year progresses.

Giving up a penalty by the 5th minute of the match. Not exactly the way Maccabi wanted to begin this second leg especially when they knew that an away goal would put them in the position of having to score three in order to advance to the Champions League playoffs.

The disarray after the 1st goal and the defensive miss marking for goals two & three were painful to watch and for the Maccabi fans this must have been worse than a root canal. Yoav Ziv was weak at best tonight, Carlos Garcia, Yeini and Eitan Tibi all messed up trying to contain the Basel offense. 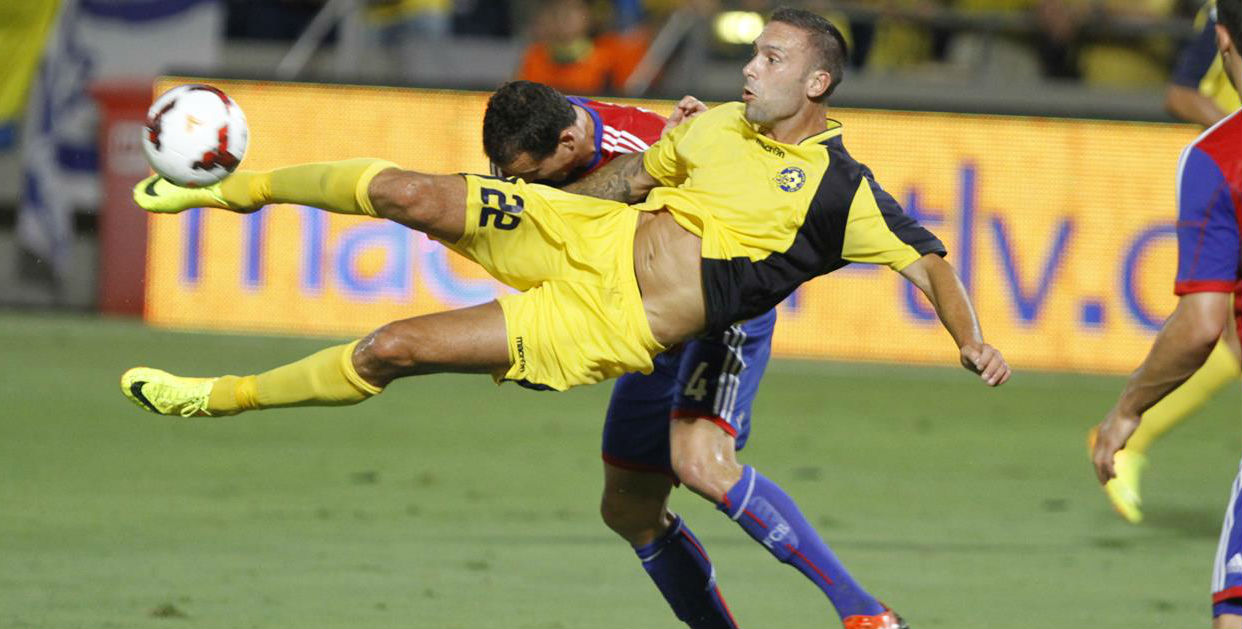 What could have been with Mohamed Salah and the Maccabi fans did not happen and a potentially volatile situation was put to rest. Sure he was booed every time he touched the ball, but that’s as it.

The Maccabi offense was sputtering for the first half an hour and striker Rada Prica again did not do anything of note in attempting to score a goal for his club. His play is worrying. Barack Yitzhaki also did not cash in during the match and Tal Ben Haim while ran miles also couldn’t help out by scoring a mark for the home side.

Manager Paulo Sousa must be taken to task over his substitution selection during the match. The introduction of Dor Micha for Yoav Ziv was a no brainer but taking Zehavi & Ben Haim off for Margulies & Einbinder made no sense. Maccabi was playing with momentum at the time of the substitutions and the fact that neither of the subs had played a competitive match in months had to be questioned. Sousa said that they were tactical substitutions, which I am sure they were, but it left many scratching their head.

Don’t get me wrong, I didn’t think that Maccabi would have ever scored 5 goals against Basel and that maybe they would have been able to slot one more home, but it just seems odd to make those subs at that time of the game and for those players.

Well it’s off to the Europa League for Maccabi which could be a good platform for the club top continue to advance in creating a system that will last for years to come. The only problem may be the side that they will face in the playoffs as they will not be ranked too highly for Friday’s draw.