The Israel Under-20 Team defeated Spain 88-78 to capture the Pre-Tournament ahead of the U20 European Championships which will be held in Israel beginning on Saturday July 13. Deni Avdija was the star of the show scoring 24 points and pulling down 6 rebounds as the potential NBA Lottery Pick at the 2020 Draft took home the MVP Award. Yair Kravits also had phenomenal game with 12 points, 8 rebounds and 4 assists to help power Israel to the title. On Saturday, Israel fell 107-106 to Lithuania as Deni Avdija clocked in with 22 points and 10 assists while Yam Madar chipped in with 19 points and 8 assists while Eidan Alber added 15 points for Israel.

Deni Avdija spoke about the competition, “This was an excellent tournament that was played at a very high level. We fought hard and the loss on Saturday to Lithuania wasn’t even a thought. We played like a team and we came into the game as it was a brand new day and we corrected our errors. Coach Ariel Beit Halachmi and the whole staff prepared us well and I’m optimistic about the championship.”

Downplaying his own efforts:
“I don’t want to talk about myself, but there is a team surrounding me and they always know where to find me, battle on the defense and grab the important rebounds. At the end of the day the bank will come to me or go to one of my teammates and we have to take the best possible shot and it’s the best feeling when it goes in.”

Skies the limit:
“There is still plenty we have to work on and improve and we will do just that. We will be sharper and knowing how to find one another. The skies the limit for what we can accomplish.”

The importance of the fans:
“The fans wee great and the people of Israel really support us. Even at this Pre-Tourney the crowd was here which really helped us win this competition. I want to ask everyone at hime watching to come out and support us, it’s really important. We are working 24/7 with the goal to make it back to back championships.”

The Israel National U25 Basketball Team took 1st place in their University Games Group with a 68-54 win over Czech Republic. Rafi Menco 15p and Idan Zalmanson 11p/10r starred for the Blue & White. Israel also defeated Mexico 77-75 thanks to a Menco game winning triple Netanel Artzi 13p, Lior Carreira 10p, Menco 10p were the high scorers. Oded Katash’s squad will face Latvia on Monday at 18:30 in the quarterfinals of the tournament.

The Israel Baseball National Team has been perfect so far this summer as they swept through the Confederation of European Baseball’s (CEB) European Championships B Pool in Blagoevgrad, Bulgaria with a perfect 6-0 record. By defeating Russia 5-3 in the Pool Championship Game, the blue-and-white booked their ticket to face Lithuania in a best of three series between July 26-28 for the right to advance to European Championship A Pool in Germany in September. Should Israel be one of the top five teams in Bonn & Solingen they will head to Italy for a chance to book their ticket to the 2020 Tokyo Olympics.

The Israel Women’s Softball Team beat Germany 4-2. Last year, we only won 1 game. This year, we finished 7-2 with our only losses to No. 2 Italy and No. 5 Spain.

On Friday, Yovel Zoosman played 14 mins and scored 2 points for the Cleveland Cavaliers NBA Summer League Team in a 85-75 loss to the Timberwolves. 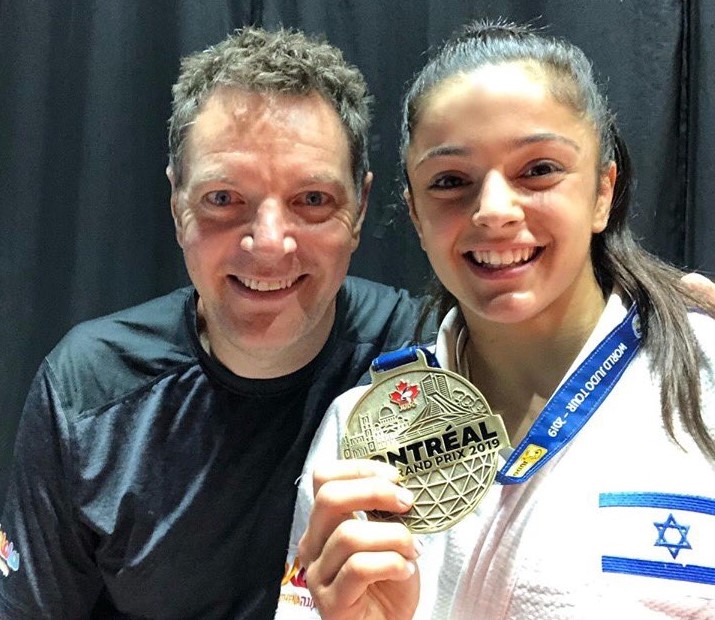 Israeli runner Lonah Chemtai Salpeter came in 2nd place in London in the 10,000 meters bettering her Israeli record to 31:15.78.

Eran Zahavi scored a penalty and Dia Saba also found the back of the goal in Guangzhou R&F’s 4-2 win over Lifan.

Yogev Ohayon joined Hapoel Holon on a 2-year contract. “I’m very about to join a great team like Hapoel Holon and I can’t wait to meet my new teammates, the coaching staff and of course the fans. I’m expecting a challenging season with a number of goals. I’ll do everything that I can to reach them and enjoy it along the way.”