You have to be good to be lucky & lucky to be good. That should be Maccabi Tel Aviv’s motto this season after defeating a well organized first half Haifa club at Bloomfield Stadium last night. Had it not been for Sari Falah’s ridiculous yellow cards (and he had been playing very well, yellow cards aside) the game could have finished much differently for Maccabi Haifa who playing a brilliant first half of football.

But the talk after this night was all about Barak Yitzhaki and his bicycle kick goal! Arguably one of the nicest goals of the season in any league and any country by any player. Certainly his strike will be talked about not only around the water coolers in Israel but around the world. 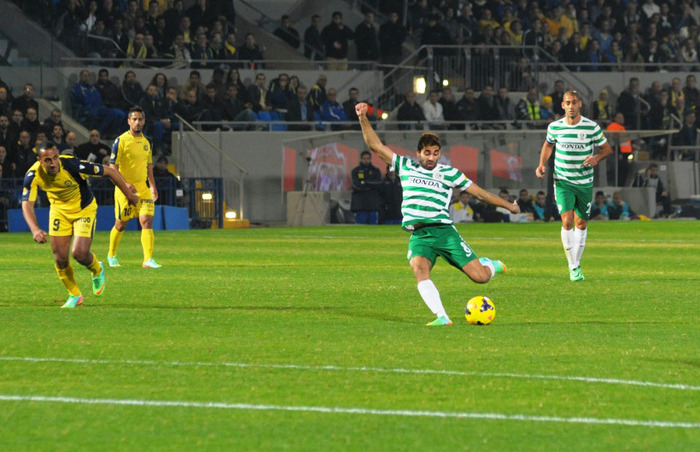 Haifa took the game to Tel Aviv and pressured their every touch of the ball while producing some fabulous chances to take a shock lead. But it was not to be. Ten minutes into the game Chen Ezra’s lighting strike hit Juan Pablo’s cross bar bounced down and the Maccabi ‘keeper was lucky to smother it. Juan Pablo looked shaky at times, but came up with the big saves when necessary, though he let Haifa back into the game giving up a goal to cut the 2-0 lead to 2-1. Of course the blame on that goal could also go around to Eitan Tibi who was absolutely schooled by Alon Turgeman turning him inside out. 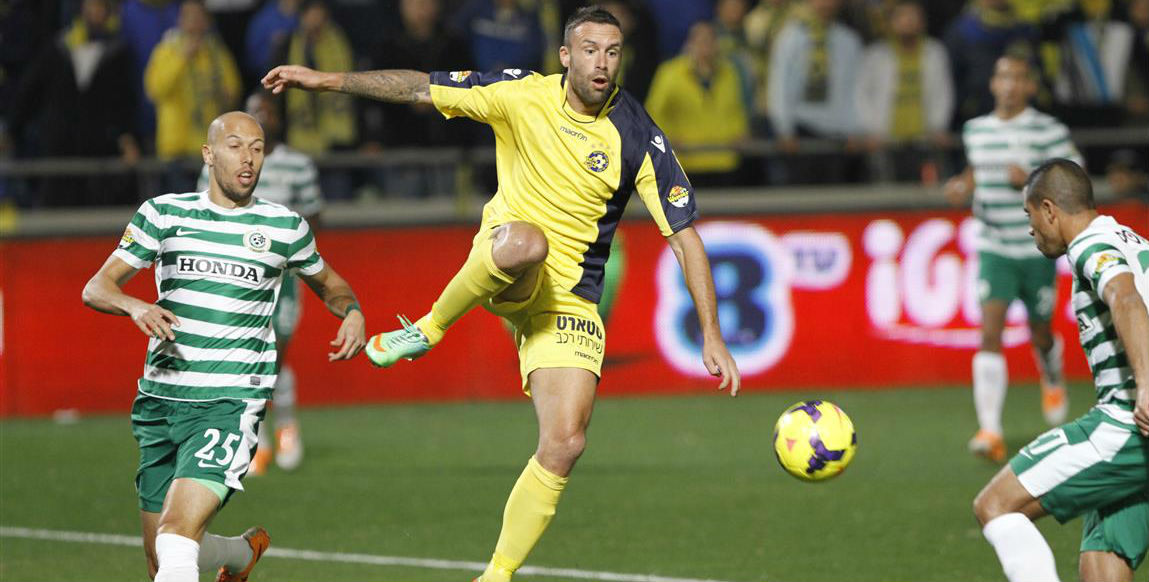 Going back to the first half, Arik Benado must have been pretty pleased to see his charges going after every ball, every 50/50 ball and putting in 120% effort throughout the first 45 minutes. And then it was Falah; his second yellow card and dismissal that totally changed the game. His handball probably saved Maccabi going on a breakaway, but the ensuing result was exactly that, a header goal by Rada Prica off a corner to put Maccabi up 1-0, a lead they would never relinquish. 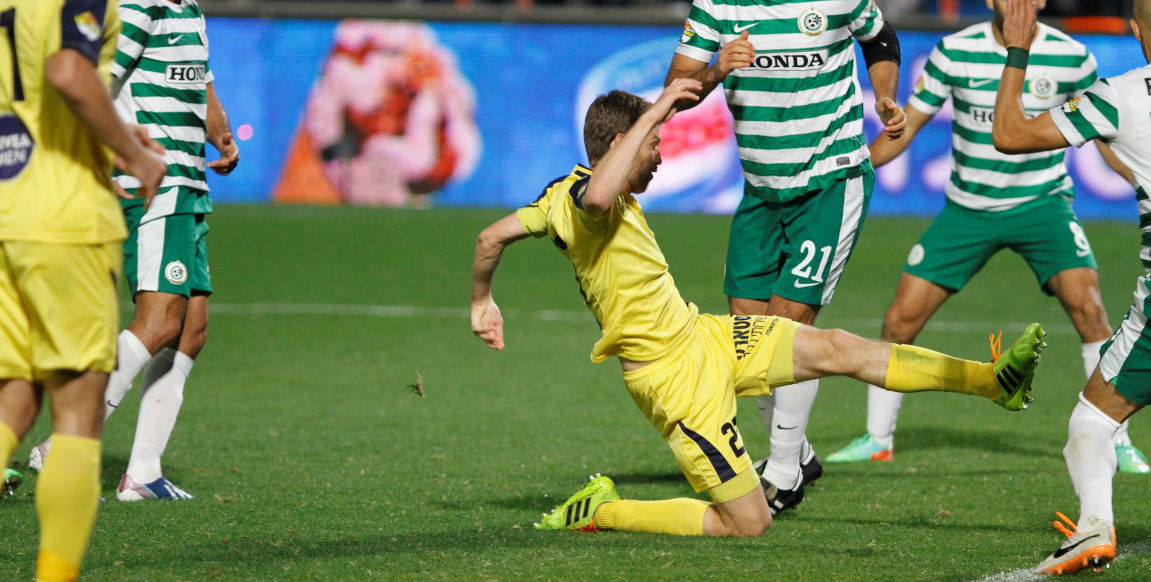 The game changed, the pace went the yellow & blue’s way, with Maccabi getting amazing chances close in as captain Sheran Yeini scored to give the hosts a 2-0 lead, except that out of nowhere Turgeman cut the lead. But before something more rash could happen, Paulo Sousa made another one of his substitutions by bringing in Dor Micha for Gal Alberman that left us all wondering why he would just not hold onto the lead instead of pushing. Again as Sousa has done game in and game out was to strike gold, this time with Yitzhaki’s phenomenal goal which left everyone in awe and wondering what happened during his year of exile in Cyprus! 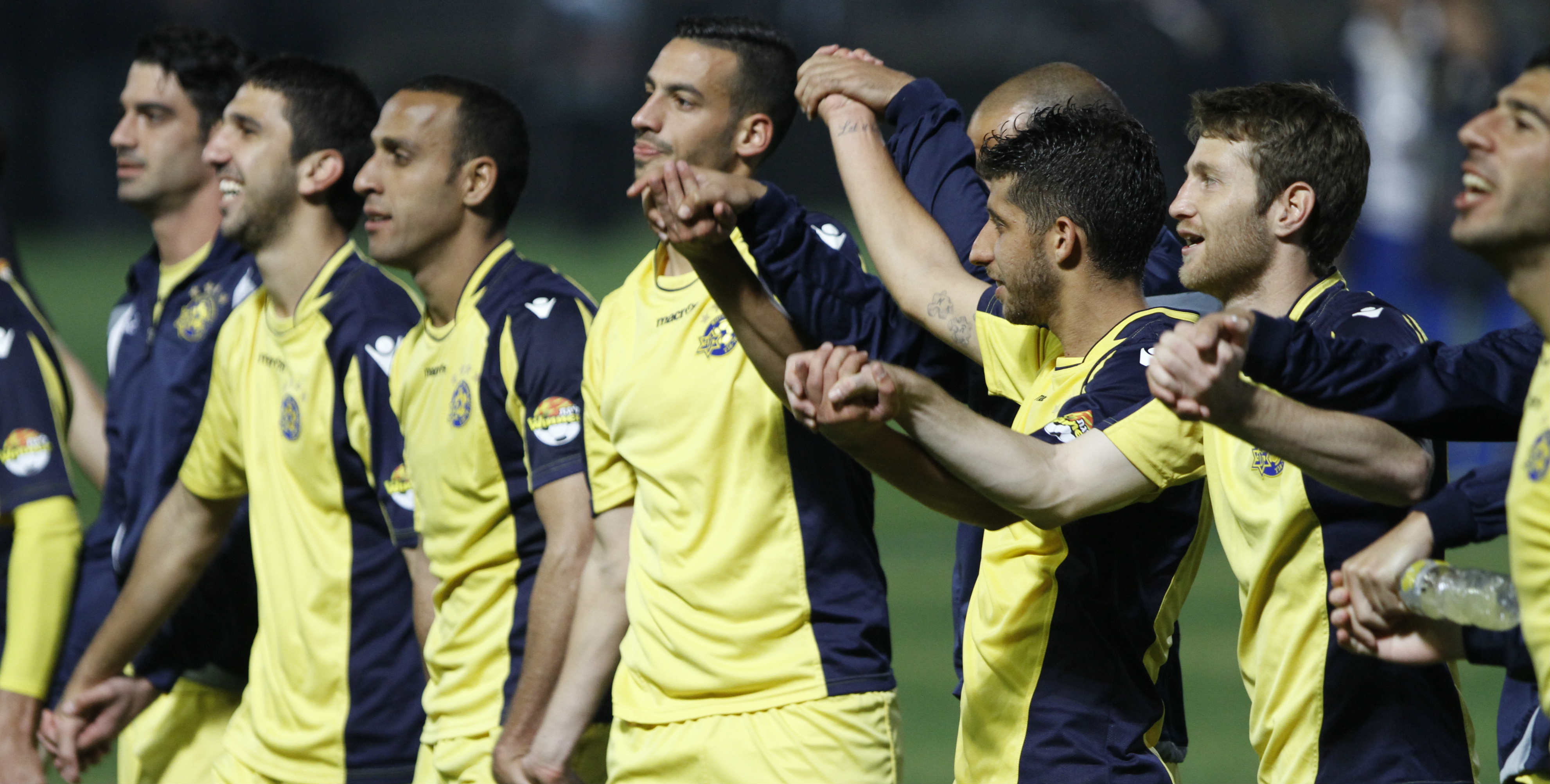 Like I said, you have to be good to be lucky & lucky to be good. Maccabi Tel Aviv is both.

Hapoel Haifa was the better team but Beitar was able to yank out a point in Kiryat Eliezer in a 2-2 draw. Thanks to an Oshri Roash own goal and an Yitzik Cohen goal during a scramble in the box Beitar was able to earn a split of the points against a very game Haifa team under the watchful eye of coach Shlomi Dora. The scoring opened with a magnificent strike by ultra hot Zarko Korac whom will surely be on many team’s radar screens during the summer transfer period, but Roash’s own goal near halftime sent the squads into the lockerrooms knotted up at one. Tatdas Kianskas gave Haifa the lead but was cancelled out by Cohen and Jerusalem went home lucky to survive and squeeze out a draw.

Hapoel Tel Aviv picked up the win but it was only after a 2nd yellow card was issued to Shmulik Melul of Petach Tikva that finally gave the Reds the breakthrough they needed. Hapoel head coach Ran Ben Shimon who has been under fire over the past month was able to guide his club to two second half goals to bring home the three points. Omer Damari picked up the first of the night and perhaps his last goal as a Hapoel Tel Aviv player since he is being shopped around to help Hapoel’s dire financial situation. Gili Vermut put in Tel Aviv’s second goal and secured the victory.

Playing at Vassermil stadium in Beer Sheva the home supporters left disappointed as their side gave up a late tying goal in injury time to visiting Akko. Croatian Mirko Ormush gave his club a split of the points with a goal in the dying seconds canceling out Glynor Plet’s 12th minute chip shot. Elyaniv Barda sent a smart pass to Dovev Gabbay who gave a cheeky backheel flick to Plet who smartly tapped it over the diving Akko keeper Dudu Gorsh. Plet’s goal was absolutely pure class by the Dutch striker, but unfortunately that was to be the only bright spot for a Beer Sheva on this night where Akko controlled the play and was the better team. Akko deservingly take a point and the loss of two by HBS could be crucial in their chase of Maccabi Tel Aviv.

Ramat HaSharon came from behind to defeat upstart Raanana 2-1 to continue their rise out of the danger zone. With all the scoring taking place in the second half, Raanana scored first in the 48th minute on a goal by Mamdou Thiam off a Asi Baldot ball. But RHS waited until the 80th minute on a goal by Ben Reichert to tie the match up and an 85th minute classy strike by Ben Ben Yair to give the visitors the lead. Following the tying goal, Tamir Cohen picked up his 2nd yellow card of the match that sent him to the showers and gave RHS the opportunity to win, which they did.

Ashdod again proved a tough home team coming into the match with five wins and three draws for a total of 18 points out of a possible 24 and their streak continued defeating the one time champion Kiryat Shemona 2-1. Nir Koinger’s side jumped out the lead at the stroke of half time with a goal by Alex Davidov, but only three minutes into the 2nd frame saw Achmed Abed square the game up at one a piece. But it was Timor Avitan who had the last word for Ashdod scoring the winner in the 81st minute to give Ashdod the 3-points and the win.

Bnei Yehuda shocked the host club Bnei Sakhnin with a 1-0 victory at Doha stadium. Amir Agaiev was the star scoring the match’s lone goal n the 67th minute off a Nes Zamir pass in the box. Bnei Sakhnin had been playing extremely good football of late but couldn’t find the back of the net against the last place club. Coach Yossi Abuksis was happy with his team’s performance and the three points could prove very valuable as the season progresses.