The Lead Point: “It all comes down to stopping other teams” – Marcus Foster leads Holon in Champions League Play against Manresa

There’s very few players in the Israeli league that are dynamic as Hapoel Holon’s Marcus Foster. The 6”3 guard knows pretty much how to do it all. Would you like a 3-pointer? Sure, Foster can do it. Are you looking for someone who can penetrate into the paint? No problem, Foster’s got that covered. How about a midrange jumper? Well, Foster has got that also.

That’s exactly why the Wichita Falls, Texas native averaging 20.6 points per game in roughly 30 minutes of play. Add to that 3.7 assists and 3.4 rebounds plus an efficiency rating of 18.5 and you know exactly why Foster is one of the league’s top players this season.

Over in the Champions League Foster is clocking in at 17.6 points per game which also places him in the top 10. Not bad for a first season playing in Europe, I guess you would say that so far it’s been a successful campaign. “It’s going pretty good,” Foster said. “It’s different coming from South Korea and playing the Asian style of game and now playing in Europe. But I think I’m adjusting well and I have a lot of good guys around me like Ryan Thompson, Rich Howell, Guy Pnini, Yogev Ohayon and Shlomi Harush who are showing me the ropes how to make a long career out of this.”

Holon made a coaching change back in December when they relieved Sharon Drucker of his duties and brought in Stefanos Dedas, the 37-year old Greek tactician who was most recently plying his trade in Turkey. The hope was to get the club back on track to be both contenders in the domestic league as well as the Champions League where the team now sits at 5-6 with three games remaining, two of which are on the road at Manresa in Spain and Sassari in Italy. The move has had a positive effect and the team now has a chance to qualify for the continental post season.

Foster outlined how Holon can make it to the Champions League promised land, “How we play defensively. Everybody is confident on the offensive end but we’re still trying to figure it out on the defensive end. Against Nahariya we started slow and they were getting easy baskets. But as soon as we started to pickup on defense our offense began to click. I think it all comes down to stopping other teams because down the road in Champions League there’s still a lot of good teams that we have to play.”

With a complement of TJ Cline, Troy Caupain, Thompson and Pnini along with the return of Rich Howell from injury and the signing of big man Joe Alexander, Foster will be the beneficiary of some proven champions on the court, “Joe and Rich provide experience and with how physical they are. They will get me open on screens which will allow me to hit them on the roll and get my shot off.”

Foster began his college career with Kansas State but was forced to move on and transferred to the Creighton where he averaged over 20 points per game. Ironically, the Bluejays were eliminated in the first round of the 2018 NCAA Tournament by Kansas State, the school where it all began for Foster in what would be his final collegiate contest. After not being selected in the 2018 NBA Draft, Foster headed to Wonju DB Promy, a team that had won 3 Korean League titles.

Following the season in South Korea, Foster packed his bags and headed to Lebanon and Champville SC before heading back stateside where he played for the Orlando Magic Summer League team. From there, Holon came calling. “When I got to the airport there were so many fans I knew that this was going to be a great season. To play in front of them at home every time is amazing.”

So far life in Israel has been kind to Foster and he’s been pleasantly surprised by some of what the country has to offer, “How Americanized it is. The food places and how you get around so quick. We’ve been able to see Jerusalem and that’s a cultural experience itself it’s amazing.”

In fact, the decision to come play in Israel was a family affair explained Foster, “My family was very excited to come out here and they were the ones who kind of talked me into it. I’m glad that they are happy about it and if they’re happy, I’m happy.”

Well, we’re happy to have you with us as well. 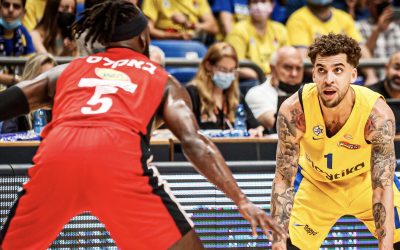 Rough night for the refs or tough defense? A little bit of both as Maccabi comes back from large halftime deficit